It Only Takes One Class Discussion to Spark a Larger Conversation 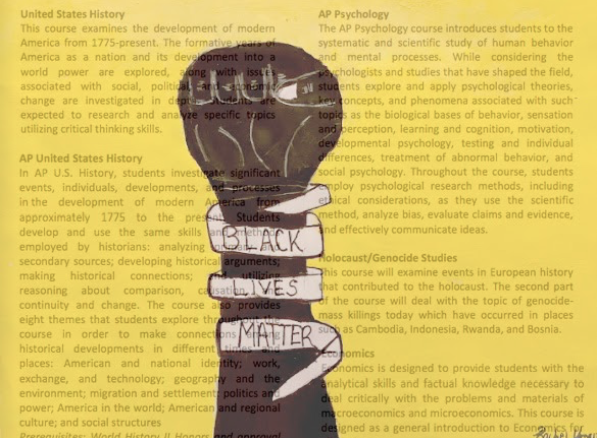 Elections are important to our society. It is our chance as American citizens to invoke change. How do we ensure that everyone knows what they are doing when selecting the best candidate? How do people learn about the power of voting and the power of social media? It starts with our younger generations.

Numerous students do not know the  basics of voting: what each party stands for, what issues are most important to each individual, and how and why to vote. Many students lose sight of their own opinions because they are influenced by family, friends, and social media. These students, as the next generation of voters, need to be well aware of all elections and issues in order to choose the candidate that will best impact our nation. Since history classes are primarily an informative class in which past events are discussed to show how these events have shaped our world, is there a way for teachers to also discuss the importance of voting in all elections? I found out by talking with two of Mount Saint Dominic’s teachers in the history department, Ms. Nicole Perez and Mr. Mike Vigil.

As of right now, Mount Saint Dominic’s current curriculum does not require coverage of elections. Mr. Vigil expresses that “it depends on the course. There is just so much information to cover that it becomes at the discretion of the instructors.” Even though it would be beneficial to incorporate discussions of elections, at times, it can be hard to tie it into the standard curriculum for all history courses. Ms. Perez elaborates that she does not “address elections as they are happening,” but instead introduces this material “based on where [she is] in [the] curriculum.” Ms. Perez does talk about how “certain legislation has impacted voting even within the United States” with her freshman and sophomore classes. In her sophomore World History II Honors and CP classes, she is a bit more distant from current events and elections, but during her AP Human Geography class, she does make an effort to incorporate  “a general understanding [of] how political data is displayed on maps… breaking it down, looking at different countries, [and] looking at the popular vote.” This way, students are able to comprehend how votes are calculated and presented; however, they still do not delve deeply into current political topics and elections.

Additionally, Mr. Vigil talks about the issue regarding “fear of discussing controversial topics” in a classroom setting, which does happen often because every individual will not have the same opinion. He suggests that there should be “at least some level of training, especially for newer or unseasoned teachers” in order to help deal with any controversial issues in a classroom with many different beliefs and opinions. Mr. Vigil does agree that there could be a change allowing for elections to be a part of all history classes permanently because “there should be the opportunity to discuss…local, state, and national elections;” however, Ms. Perez feels that it “depend[s] on which course you take.” That being said, by discussing elections early, starting with the freshman class, it may spark an interest in political science. As Ms. Perez expresses, “the interest begins obviously before that enrollment period. You can start thinking about… how the government works and how that then applies to today.”

Now if the curriculum did require elections to be taught, Mr. Vigil reveals that current elections are the best place to start because “the more recent something is the better you are able to use it as an example and you are able to connect it.” For example, when discussing equality movements that took place two hundred years ago, history teachers can reference current civil and equality movements like the Black Lives Matter protest. Both Mr. Vigil and Ms. Perez feel that if they were to explicitly teach about the election, it would be taught through an informative and open discussion. As Ms. Perez explains, “the informative piece should come after you assess the students to see where they know, so you can fill in the gaps” but then “towards the end of a class, [you] would leave it to some open discussion.” Furthermore, Mr. Vigil’s mantra is that the “goal.. and the role of the instructor…is really to facilitate an environment where people feel comfortable discussing their ideas.” These are really important insights because if the Mount decides to take upon a transition to the current history curriculum, these teachers already have a well thought out plan.

When discussing how social media has affected student engagement in politics and elections, Ms. Perez expresses that “social media has the power to increase that involvement and that engagement because it moves at such a rapid pace.” Everyday there is something new that affects the world. Whether it is positive or negative depends on the event but the way we react and act upon each situation is up to us. Social media takes a vast toll on that societal reaction. Especially considering the 2020 presidential election, numerous ineligible voters were still partaking in election discussions through social media platforms. However, social media may not always be a credible source. Ms. Perez emphasizes that “the flip side to social media is because things are so instant and anybody has the autonomy to publish anything on social media, it can become difficult for not just students but for anyone in general to discern what the truth is.” This is a huge concern because a majority of Gen Z are students who are immersed in social media and are not necessarily being taught reliable sources of information. Mr. Vigil includes his opinion that “encouraging [students] to use social media positively in order to make a change as a responsible citizen is the best way to connect [his] teaching with what’s the inevitable.” If social media was positively taught in history classes, more students would possibly be engaging in informed political discussions, which may, in turn, persuade them to register as voters and turn out in greater numbers.

Through the usage of social media, the year 2020 has now sparked a new interest in young students. As Ms. Perez suggests, “being that we were in this extraordinary situation of a lockdown in March extending into June at least for the school year, a lot of students [are] being more immersed in social media [and] in these resurgences of civil rights movements.” Ms. Perez makes an interesting point that “momentum could be incredibly empowering for the students.” Many students are under eighteen so they cannot vote, but being active members in society they can use the ever changing world to empower themselves. Mr. Vigil adds that while still being a minor, we can participate in “interest groups, activist organizations, political campaigns through social media, [and even] hav[e] a discussion with [our] family at the dinner table.” All these different examples can really instill a sense of civic duty in our future voters.

The more we get students involved with any part of politics, the greater impact it will have on society. We are the next generation to change what the United States needs help with, but it can only be done by educating the youth. Having a simple discussion about elections, candidates, and crucial issues inside the classroom can spark students’ interests. Especially though the popularity of social media, students can partake, through many different ways– liking, commenting, posting or reposting– in an online conversation shared amongst thousands of other people. As long as they are trained to use credible sources, students can use social media to let their voices be heard. It only takes one class discussion to spark a larger conversation for students, which will get more people involved in political discussions.